A few months ago I met with a friend who I hadn’t seen in about a year. They suggested we go to the Wellcome Collection – and, though I’d never been, I’d heard it was good – so we went, without knowing much about what we might see. All three exhibitions on display turned out to be fairly disappointing, but the one I’d like to focus on for now is Medicine Man.

Firstly, I’d like to prime you in a way that I was not. In doing a bit of reading when writing this up, I looked at their website. The Collection is marketed as ‘[t]he free destination for the incurably curious: the London museum that invites you to explore what it means to be human.’ This seems fitting, as my criticisms focus on how Medicine Man is designed and curated in a way that privileges a particular notion of what it means to be ‘human’, and subordinates, simplifies, and ultimately disrespects other kinds that deviate from this ideal.

I read the name Medicine Man and didn’t think all too much of it before wandering through the doors into a dimly lit, wood-panelled room full of glass cases. I didn’t notice the small sign that read, ‘this gallery contains human remains’.

Admittedly, I knew nothing about Sir Henry Wellcome’s personal history or interests, and did not immediately spot that the exhibition was named after the term for spiritual healers in Native American communities. I was shortly to find out: the first thing I saw was Wellcome – ‘entrepreneur, philanthropist, patron of science’ – in ‘fancy dress’. 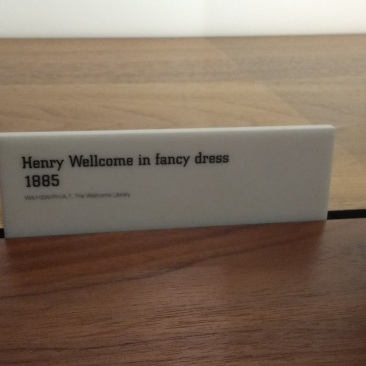 I want to pause on this thought. Sir Henry Wellcome has, we are told, collected hundreds of ‘extraordinary’ artefacts that form ‘a vast stockpile of evidence about our universal interest in health and the body’. I glance at this description and back at the picture of the man in ‘fancy dress’, and I’m intrigued as to where this outfit comes from. Is it something he brought home from one of his many journeys abroad, or is it a reproduction, imitation, or simple product of the imagination of a British tailor or dressmaker? I’d genuinely like to know, because I don’t think it likely that the man would have had a posed photograph taken of him in just any old outfit.

Whether or not it is ‘authentic cultural attire’, it seems to have been chosen by the curators because it fits in neatly with what I will argue to be the deliberately constructed oddness of the exhibition. He certainly looks the part. And then I wonder: is this exhibition, which is formed from the personal collection of Sir Henry Wellcome, who was in his life obsessed with human relationships with health and the body, going as far as to position him as the titular Medicine Man? Is this term, with its complex and individual meaning and history, being appropriated to refer instead merely to a man who was interested in medicine? It certainly seemed that way.

While I ponder this, I glance behind where the image of Wellcome is displayed. On the wall there is a picture of an actual Navajo medicine man, almost incidental amongst the scattered collection of images – none of which share any noticeable theme, beyond being pictures of non-white people. The impostor ‘medicine man’, Sir Henry Wellcome, took prime position in the room, whereas the photo of a person who actually had that title was subordinated to a corner. At no point in the exhibition is the term ‘medicine man’ explained; I can only assume that this was not a priority for the curators, and the name was chosen because it sounded quite cool. An easy erasure of history and culture for this nifty title.

This random display of pictures containing the real medicine man betrays something that sticks with me about this exhibition. The introductory passage claims that objects are loosely grouped by theme, purposefully ignoring irrelevant markers such as culture or time period. The ways in which they are grouped are not indicated. It is up to the viewer to decide how the objects are related, but often, it does not seem particularly obvious why they are displayed together, or the groupings add little to nothing to your appreciation or understanding. Each artefact is divorced from any context other than the loose theme the curators deem it to share with others around it. The main effect of this is not really that they are viewed on their own terms – but rather, this isolation causes them to become little more than the ‘oddities’ that the museum boasts to have on show. It is a self-fulfilling process: these objects only become oddities because they’ve been positioned as such. 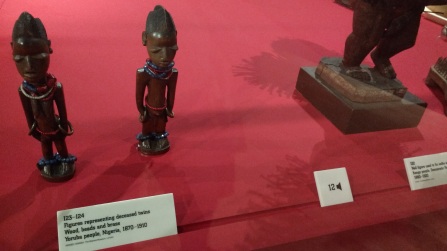 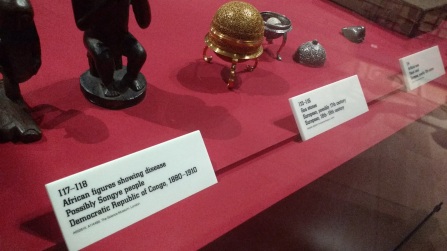 And I am wondering if any systematic analysis can ever really be undertaken of this ‘vast stockpile’ that Wellcome collected. Of course it cannot. They have not been categorised by any usefully comparable qualities; they are little more than a haphazardly-organised collection of things. And I don’t really believe the intention was to give the viewer anything other than a sweeping impression of the varying ways health and medicine have been approached across times and geographies. (With a scope and set of objects so deliciously broad, this purpose seems more than a little disappointing to me.)

The one thing unifying all these oddities is their contrasting kinds of weirdness. Stripped of their histories, simplified into one-dimensional ‘things’ for the mostly-white museum-going public to gawk at, these objects as snippets of history and culture undergo a process of othering. Where the exhibition seeks to portray an equal and essentially human obsession with medicine and health, it fails, instead reproducing colonialist attitudes towards non-European cultures and practices. Figures are ‘African’, and the strangest European objects on display are some dentures, a first aid kit and a chamber pot.

If I am not particularly convincing as is, I will turn to the two most disturbing elements of the exhibition. I return first to the sign that I had initially missed, that indicated there were human remains within the gallery. 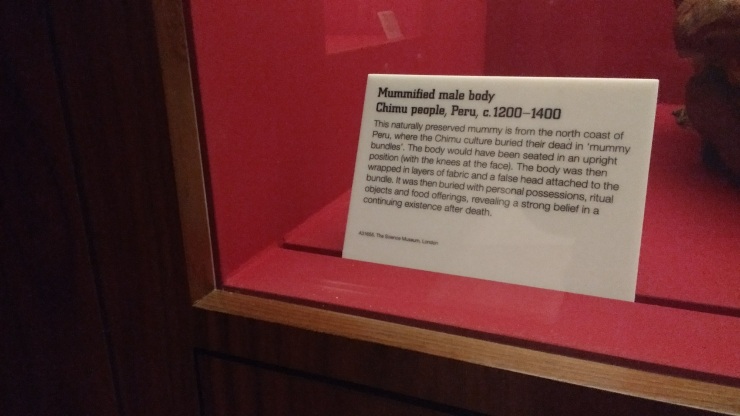 It is obviously not peculiar to this museum to display a mummified body; many museums do this. My reason for bringing this up isn’t because of a special snowflake squeamishness, nor is it to engage in the debate surrounding who ‘owns’ the art (or, in this case, the bodies) extracted from non-European countries and inevitably displayed in British museums.

It is instead because I just don’t know why this body is here. What does it add to the exhibition? What is the exhibition’s purpose, again? I suppose, in good faith, we are interested in the circumstances surrounding burial practice – it does say something about how humans engage with health, medicine, and the body. But if that’s our real interest, if we are really engaging in an intellectual pursuit beyond ‘wow, this thing is pretty cool and weird’ – where is the rigour, the context, the comparison? Really, I think the curators are very happy to display this body on its own – because it serves its purpose, and provides all it needs to, just fine that way. And this purpose is simply to signify ‘something which is different from the norm’ – that is, the white, the European. And isn’t it icky?

The second item I want to examine is a piece of equipment designed for use by amputees, displayed on a case of its own alongside a piece of paper showing a writing sample. Below is a transcription:

“It is too much to hope that at least in British territory the night is finally gone. & that under enlightened & sympathetic rule the Negro will now have an opportunity of developing himself & his country? For a period of transition has arrived in earnest? the misionary [sic] the government and tyhe [sic] railway in very diverse ways are creating a new west africa making it difficult to write in the present tence [sic] of fashions that flourished ten years ago.”

Taken on its own the text communicates familiar paternalistic and racist attitudes on the topic of the effort to ‘civilise’ West African peoples. These attitudes expressed by the soldier might appear in other contexts to be more straightforwardly anachronistic – but as the text exists and is on display within the context of this exhibition, it takes on other qualities. As I asked about the mummified body: is this necessary? Did the ‘Mechanical Substitute for the Arms’ – which seems to me, here, to be the intended focus of the display – benefit from appearing alongside this particular excerpt of writing? Or does this text become a commentary to the objects displayed in the exhibition: that we will marvel at the novelty of difference, but only so far as we can use these examples to maintain a particular white, Western status quo. We can celebrate these objects for their oddness (if displaying them is celebrating them), but dignifying them with their full contexts and histories is too much of a chore.

Museums are spaces that are able to challenge or reproduce cultural hegemony. They occupy an important position as educational tools. It’s necessary and healthy to critique them out of a belief that they can and should be better for their customers and more responsible to the cultures and customs they represent. I struggled to get on with Medicine Man because, try as I might, I saw little substance to it beyond a series of objects crudely grouped together under the broad theme of ‘medicine’. The real benefit  was instead in engaging with the issue of the museum space, and the hegemonic colonialist values it can easily reproduce.